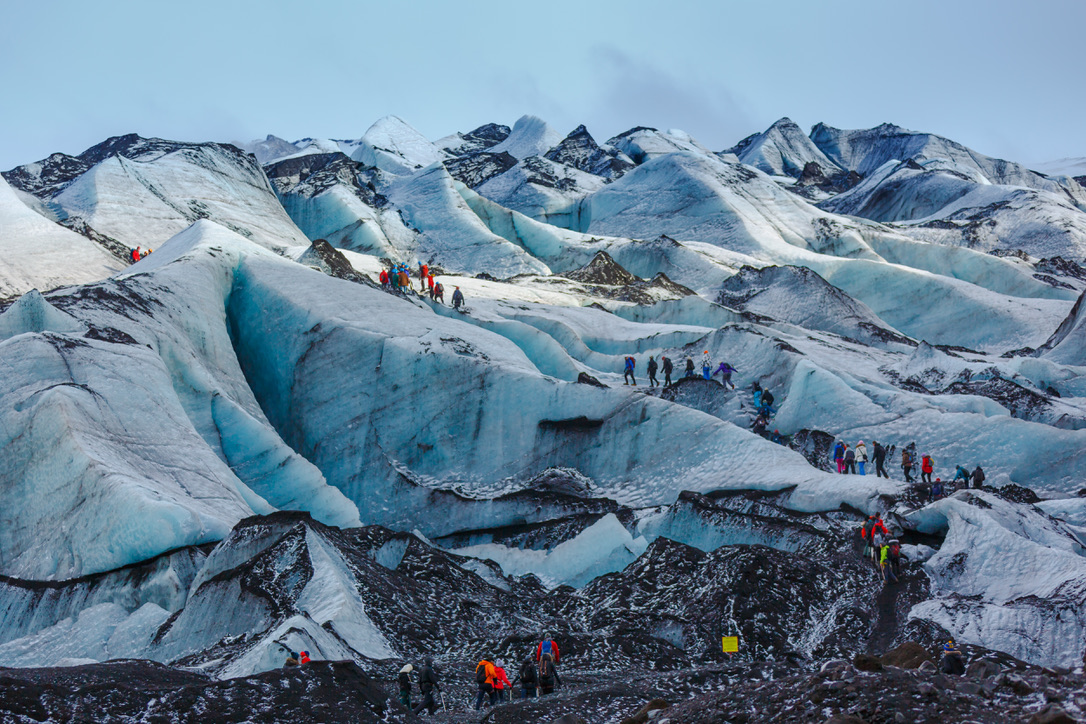 This tour shows you the ever-changing scenery of the Icelandic countryside, through mountains and valleys, with volcanoes, glaciers, rivers, hot springs and waterfalls. You will visit the tree spectacular Icelandic National Parks and experience the very best of Icelandic culture.

*Ask for our special price for groups.

Day 1. The Golden Circle and Reykjavik

We see classics today. with Golden Circle sights: Gullfoss the beautiful double “Golden Falls”; the active geothermal area of Geysir, where we can see Strokkur “the churn” spout up to 25 meters (70 feet) every five to seven minutes. A visit to ancient Viking Parliament area of Þingvellir National Park tops it off before returning to Reykjavík.

Day 2. Journey to the centre of the Earth -  Snæfellsnes

This day we will discover the amazing volcano Snæfellsjökull and we will also stop in some of the best coastline places that Iceland has to offer.

Snæfellsjökull National Park is situated on the Snæfellsness peninsula. The park was established on June 28, there you can find many famous sites including the magnificent glacier Snæfellsjökull (Snæfell Glacier), Djúpalónssandur beach, Lóndrangar the two massive lava formations, Sönghellir (the singing cave) and Rauðfeldargjá the hidden waterfall. The main purpose of establishing the park was to protect the unique landscape of the area, the rare plant and animal life and also the important historical relics around the mountain.

The Snæfellsjökull dominates all the area, with its magnificent two pikes, created when the volcano erupted, destroying the glacier which fell down inside his magma chamber.

Day 3. Hekla volcano and swimming pool in the mountains

Hekla is a stratovolcano in the south of Iceland with a height of 1,491 metres (4,892 ft). It is one of Iceland's most active volcanoes; over 20 eruptions have occurred in and around the volcano since 874. Hekla is part of a volcanic ridge, 40 km (25 mi) long. The most active part of this ridge, a fissure about 5.5 km (3.4 mi) long named Heklugjá, is considered to be the volcano Hekla proper. Hekla looks rather like an overturned boat, with its keel being a series of craters, two of which are generally the most active.

Day 4. Vestmannaeyjar – the Pompeii of the North

The Westman Islands or Vestmannaeyjar are without a doubt among the most beautiful places in Iceland, they consist of a group of fifteen amazing islands which are situated at a short distance off the south coast of Iceland.

We will visit Eldfell, which is a composite volcanic cone just over 200 metres high. It was formed in a huge volcanic eruption - the name means Mountain of Fire in Icelandic. This volcanic eruption is considered the largest natural disaster in Iceland in recent history. The eruption caused the destruction of a third of the town, and the massive changes to the landscape of this tiny island made world news. Now, more than 30 years have passed, and the memories and signs of the spectacular eruption are fading, but lava and ash still cover almost 400 homes and buildings.

Visit Skaftafell at the Vatnajökull National Park, covered by ice and nestled below Iceland’s highest mountain, the 2110 meter Hvannadalshnjúkur. Then cross the sandy desert of the south coast, overlooked by mountainous cliffs, glaciers, and waterfalls. We stroll along the black lava beach and bird cliffs near the village of Vík.

After lunch we discover the amazing natural ice cave in Vatnajokull glacier, they are changing all the time, they can be crystal blue and it depends a lot on the light how bright they are. We will drive with a super truck driven with an expert local guide from the glacier lagoon to the cave and back again.

At the end of the day, we will visit the amazing Glacier lagoon - Jökulsárlón

Eyjafjallajökull is a stratovolcano with a caldera and is the most southerly volcano on Iceland mainland. It is a relatively small volcano and is located west of Katla volcano. It has fissure-fed lava flows which occur on both the East and West flanks of the volcano but are more prominent on the Westside.

During this day we will visit Reynisfjara the black beach, the Skogar National museum, the Eyjafjallajokull volcano museum and the three waterfalls Skogafoss, Kvernufoss and Seljalandsfoss.

During this day we will visit Grindavik, one of Iceland’s fishing villages. In the area, there are geothermal hot spring Gunnuhver and where we will observe active geothermal areas. Next, the tour leads to the country’s oldest lighthouse, “Reykjanesviti” where spectacular birdlife can be viewed. On a clear day, you can see the small island of Eldey about 16 km from the coastline. We will also stop near to the “The Bridge between Continents”, where the Eurasian and North America Plates are being forced apart, the geological record is clearly defined.

In the afternoon we will have some quality time in the Blue Lagoon natural bath.