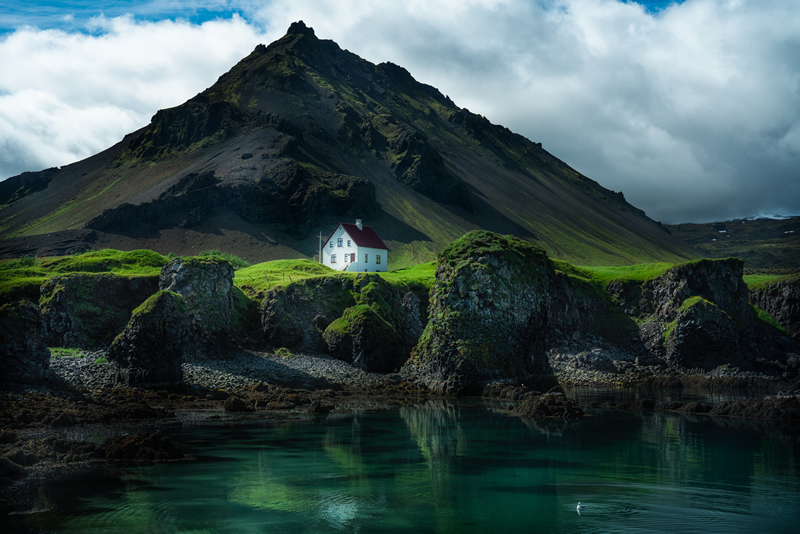 Iceland is a country full of pure nature and sustainable energy. During this tour you will feel the power coming from mother earth and explore the beautiful nature of the island.

*Ask for our special price for groups.

Feel the pure energy of Iceland. Ten percent of Iceland’s landmass is covered by glaciers, where many strong rivers are coming from, providing the nation with a wealth of hydro-power. Under the surface of the earth there is also resource of steaming geothermal water which highly reliable and clean energy.
We will take a tour around the island, explore geothermal areas, strong waterfalls, glaciers, volcanoes, black beaches, lava fields and other places in nature. During the tour you will learn how this small nation in the North is using those resources and transform them into pure energy which is used to heat up the houses and provide electricity to families, small and big businesses to make the life easier.

Study visit to the Geothermal energy plant in Hellisheidi   https://www.geothermalexhibition.com/

Going for the Golden Circle which is the most popular day tour in Iceland. Geysers, The Golden waterfall and Thingvellir are classic destinations for any visitor to our island.

We want to add something unique to your experience and that's why we will also visit the big volcanic crater called Kerid.

Thingvellir National park is the National shire of all Icelanders. It lies within the belt of volcanic activity and fissures which pass across Iceland, a part of the mid-Atlantic ridge, the junction of the American and Eurasian tectonic plates.

Geysir - the biggest geysers of Haukadalur are Strokkur and Geysir itself, which gives the others their name. Strokkur erups every 5 to 10 minutes, throwing a column of water into the air to a height of 20 to 30 meters.

Gullfoss is one of the most amazing waterfalls in Iceland. A visit to ancient Viking Parliament area of Þingvellir National Park tops it off before heading to the south where we will take the ferry to the island of Vestmannaeyjar.

Day 3 The island of the Volcanos

We start the day by taking the ferry over to the Vestmannaeyjar island where we can discover a fresh volcano called Eldfell. It errupted in 1973 forcing the evacuation of the inhabitants for the five months that the eruption continued. At the time, there was uncertainty whether the island could ever be repopulated. The eruption caused the destruction of a third of the town, and the massive changes to the landscape of this tiny island made world news. Afterwards, the island became a destination for tourists and scientists alike from all over the world. Now, more than 44 years have passed, and the memories and signs of the spectacular eruption are fading, but lava and ash still cover almost 400 homes and buildings.

Today we will discover the beautiful south coast of Iceland.

In the south coast, you can see many of the most beautiful places in Iceland. A great combination of Ice, lava fields, lagoons, huge mountains, volcanoes and rough black coastline. There are also plenty of great waterfalls in the area for example Skógafoss, Irafoss and the secret waterfall Kvernufoss, we will enjoy the pure nature and visit many places of interests. We will stop by the mentioned waterfalls, in Reynisfjara black beach which is the most amazing beach in the whole country.

The highlight of the day is a unique glacier walk in Solheimajokull which takes around 1,5 hours. During the hike, you will have special guides which are trained to do those kinds of walks and they will provide you all necessary equipment for the safety.

We start the day by visiting the biggest glacier in Europe Vatnajokull, Jökulsárlón glacier lagoon and the diamond beach.

We continue the tour by visiting mountain Vestrahorn which is one of the best spots for photos in Iceland. There you can also find Stokksnes and the Viking village.On the way to our accommodation we will go along, the dramatic east coast boasts long, narrow fjords with steep sides and jagged peaks which contrast with inland fertile farmlands. Natural harbors mean picture-postcard fishing villages and seemingly never-ending roads cross the region, providing beautiful sweeping views with steep mountains towering just behind the houses.

In this area, you will see some of the features that make Iceland a unique place in the world: spectacular fjords with a rich sea life, a great variety of bird life, and countless breathtaking hiking paths.

We also visit Petru stone museum where you can see a unique collection of natural stones from the area.

This day we go through the highlands from the East to the North of the island. discovering the magnificent Dettifoss which is Europe’s most powerful waterfall.

Lake Mývatn is also one of the wonders if Iceland. It is a unique natural environment created in a lava eruption 2300 years ago. Here you can find geothermal hot springs, caves with steaming waters, blue waters, big rock formations, unique bird life and fauna.

During the day, we go for visits in the area to the following places Hverir, Grjótagjá, Dimmuborgir, Krafla power station and in the end of the day we take you to the Green lagoon for a relaxing time in the natural baths.

We start the day by going to the north coastline heading to Húsavik which has become the capital of the whale watching tours in Europe in the last year.

The whale watching tour takes around 3 hours and the changes to see the huge mammals playing in the sea are very positive in this area of Iceland. It is a great experience to be in the North – Atlantic Ocean with the majestic mountains in the coastline of Bay Skjálfandi and enjoying the mammals of the ocean at the same time. After the whale watching we visit the great waterfall Godafoss which means the waterfall of the Gods.

Day 8 The West of Iceland

We start the day by visiting the rock Hvítserkur which is a unique formation and a great place for photos. Next stop is the seal center in the small fishing village Hvammstangi where you will get information about those beautiful animals before visiting them at the coastline. Afterwards we explore the Borgarfjordur area where you will see the great Hraunfossar, a series of waterfalls formed by rivulets streaming over a distance of about 900 m (almost 300 ft!) across the Hallmundarhraun lava field, which flows from an eruption of one of the volcanoes lying under the glacier Langjökull. The waterfalls pour into the Hvítá River from ledges created by less porous rock in the lava.

Literally a stone's throw upstream from Hraunfossar, there is another waterfall called Barnafoss. Its name, "the waterfall of the children," comes from an accident which is said to have taken place here in a previous century. There was a natural bridge over the waterfall, and two children from a nearby farm fell to their deaths crossing the river on the bridge. Afterwards, the grief-stricken mother had the bridge destroyed.

Finally, take in the sights at Deildartunguhver, the highest-flow hot spring in Europe.

Today you'll view Snæfellsjökull volcano, wearing a magnificent crown of ice, the highest peak in this area of Iceland and is often visible on clear days from Reykjavik. It is this place that Jules Verne chose as the entrance to the earth's core in Journey to the Center of the Earth by Jules Verne.

Ytri-Tunga is a charming farm with a nearby beach that is a popular seal colony. Animal lovers will enjoy seeing their cute faces as they sunbathe and play in the surf.

Arnarstapi and Hellnar are in a lovely coastal area with a natural harbor. Beautiful rock formations decorate the coastline, spotted with green-and-yellow moss, and you can stroll along the cliffs here to take in the refreshing sea air.

Look for Lóndrangar, two black basalt columns marking the coast, so tall they can be seen from the road! Djúpalónssandur is another gorgeous black beach, where the air is filled with the sounds of birds circling the cliffs and the ocean waves hitting the sand.

At Djúpalónssandur, you’ll find a curiosity on the beach: four large, smooth stones. They are “lifting stones,” used to measure the strength of fishermen who once worked and lived all along the coasts here.

At the famous Bjarnarhöfn Shark Museum, you'll see treasures and tools collected during a lifetime at sea.